Art Lesson: STEAM Pendulum Painting *This is a great video kids can watch. It can show students how to make a pendulum at home.

Forces act on objects and have both a strength and a direction. An object at rest typically has multiple forces acting on it, but they are balanced, resulting in a zero net force on the object. Forces that are unbalanced can cause changes in an object’s speed or direction of motion. The patterns of an object’s motion in various situations can be observed, measured, and used to predict future motion. Forces are exerted when objects come in contact with each other; however, some forces can act on objects that are not in contact. The gravitational force of Earth, acting on an object near Earth’s surface, pulls that object toward the planet’s center. Electric and magnetic forces between a pair of objects can act at a distance. The strength of these non-contact forces depends on the properties of the objects and the distance between the objects.

Students will create art by using force, gravity and motion.

Students will place large pieces of paper or poster boards under the pendulum. Be sure to work on a tarp.

Students will fill the condiment bottle with paint and swing the pendulum. Students will change paint, paper and direction of swing as they decide. 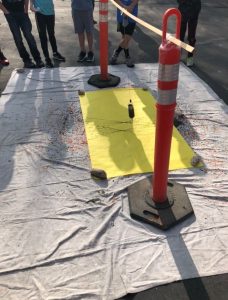 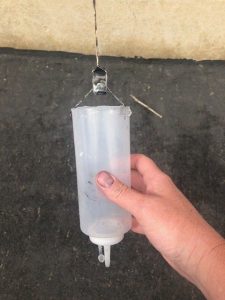